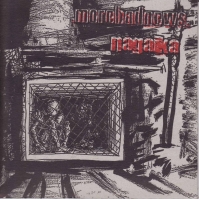 This is a split of 2 bands from Brno, both of them playing dark hardcore with strong political message. While Nagaika are more meloic, More Bad News stick to more metal side of hardcore (still dirty enough, though). The CD was self-released. Members of Nagaika played also for example in Terrariot. More Bad News featured members of See You In Hell or Tummo.