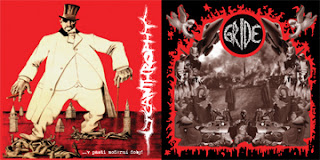 GRIDE has been active played since mid 90ies. A group of hardcore and grindcore freaks has formed the band in 1996. Early production mainly drew from such bands like DOOM, NAPALM DEATH, AGATHOCLES. Later they moved to more complicated style. Members are/were also in Dezinfekce, Ucházím or Radiolokátor.
LYCANTROPHY are form vysočina and play grindocre/fastcore. They've been around for a while and did a number of tours.